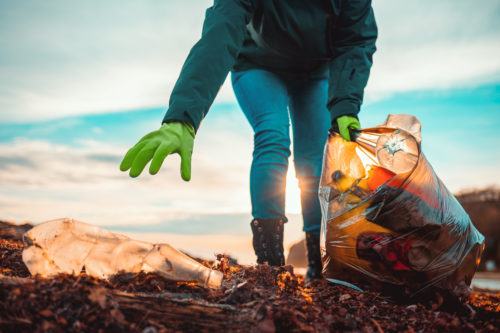 In previous blog posts, we have discussed the implications of littering food waste, but never touched on the significant impact of all other litter (garbage/recycling) on the environment. It is almost hard to believe that people still litter and illegally dump when garbage and recycling bins are so widely available. However, it is hard to miss and ignore the colourful litter that covers highway shoulders or local park landscapes, so it is clear that it is still happening.

Although this may seem obvious, to clear up any misconceptions, I thought it was important to address exactly what littering is. Essentially, littering is when any form of garbage or recycling is disposed of in places where it is not contained (usually on the ground). The issue is not about one person accidently leaving a water bottle on the side of the road, the issue becomes impactful because it is not just one person. Overtime, this litter piles up, creating not only an eye sore, but also an environmental issue. The most commonly littered items are packaging from convenience foods (granola bars, chips) and fast food, as well as cigarette butts, plastic drink bottles, broken electronics and toys, and often food waste (as discussed in a previous blog post).

Why Do People Litter?

Honestly, I do not know. There are lots of garbage and recycling cans readily available throughout all cities and towns. At this point, there really is not an excuse to throw your litter on the ground. However, here are a few reasons why people might do it:

If there is nowhere else to throw it, sometimes the ground does not seem like the worst place. Especially if you are on a long walk or in an area where no garbage or recycling bins are present.

Sometimes on out and back trails, people make a habit of leaving their litter on the side of the trail to pick up later, so that you aren’t hauling it throughout your entire walk (think bagged dog poop). This is a fine idea, if everyone always remembers to pick it up on their way out. Even I have fallen victim to this, so I can understand how it can happen fairly easily. This task slips your mind, so to speak. I have learnt the hard way that the best practice is to just carry it with you. Bring gear that helps with holding it (backpack, etc).

3. There is already garbage in an area

Often people litter where litter is already present. Once the precedence is set that it is ‘allowable,’ there is less guilt associated with it. This is especially obvious on highway shoulders or in parks.

4. Blowing Recycling/Garbage on Pick Up Day

I know that in my residential neighbourhood, this contributes to a large amount of the litter on the ground. No one claims it because the wind has blown it over multiple driveways, until it ends up in a bush or in a ravine. This is frustrating because there are limits as to what you can do about it. Especially as it goes largely unnoticed throughout the day while you are at work, and the garbage collectors have not arrived yet.

Why is Littering Bad?

The most obvious reason that litter is bad is that it pollutes the environment, but there are a variety of reasons as to why littering is bad, varying from impacting wildlife and their habitats to high clean up costs and tourism. Here are a top few main reasons why you should avoid littering.

Among the most obvious, polluting the environment is probably the most important reason why you should not litter. One might not think that throwing out a piece of plastic on the side of the road has much effect on the environment but it actually can impact it quite dramatically. Often, plastics, packaging, cigarette butts, and electronic waste are toxic. This is hazardous to soil degradation, wildlife and their habitats and the overall ecosystem. What is worse is that these hazards can be blown or washed into our rivers, waterways, lakes, creeks and for atlantic or pacific Canada, oceans. This not only impacts our drinking water, but also all the animals that inhibit those waters. We have all seen pictures of sea turtles surrounded by plastic bags that they have mistaken for jellyfish (their main food source).  Unfortunately, this is a reality for many water and even on-land animals.

Some litter is more harmful than others in the way of physical harm. A granola wrapper is not going to necessarily impact you on your hike, but if a squirrel mistakes it for food, that is going to directly harm them. With that said, any litter can impact any life, but generally when I talk about litter that is harmful to people and animals, my thought is more aligned with that of sharps and needles. Unfortunately, people still improperly dispose of these items in neighbourhood parks and trails. These items are an environmental pollutant and also could be life threatening to humans and animals if one comes into contact with them. Sharps and needles are among the most irresponsible things to litter.

If your neighbourhood is full of litter in treelines or bushes along trails or roadways, this is not necessarily going to be a selling feature for new homebuyers or your house value. Litter is an eye sore and can certainly decrease the value of your neighbourhood. This also speaks the same for the tourism industry. Since we are based in Niagara, it is easy for me to reflect on Niagara Falls’ tourism area, which is generally always full of litter due to the high volume of traffic that comes through each day. Although people are hired to take care of this litter each day, those costs are high to just keep that area clean. If people just properly disposed of their wastes, tax dollars to cover these clean up costs would decrease.

So, What Can You Do?

Aside from not littering yourself, there are lots of things you can do to help curb the environmental degradation that litter impacts. Here are a few ideas:

Depending on your level of comfort and support for this cause, the most effective way of lessening litter is to arrange a litter pick up day with you and a couple of friends. There are always areas in your city or town that could use some extra help in this (think highway shoulders or parks). However, be extra careful when you are dealing with litter because you never know what you may encounter (sharps, needles, etc) and be wary of traffic.

2. Educate those around you

Maybe people do not quite know the impacts of littering. If you see someone littering, try educating them on the facts and hopefully that will assist in future littering.

Sometimes you’ll encounter the odd water bottle, battery or can on a walk. If you can, pick it up! If everyone picked up one piece of garbage on every walk they went on, we would be able to make a significant difference.

Overall, we cannot control what or why people litter, but we can all try to do our part to curb its impact. I realize that picking up other people’s garbage is not ideal, but who else is going to do it? We all have a responsibility to the environment, as it plays a vital role in our everyday lives. It may not be your garbage, but still impacts your environment.