Eco-Vehicles: Why We Bought One For Our Sales Team & Why You Should Buy One Too! 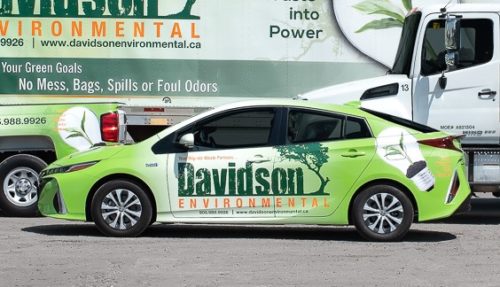 There are so many new cars reaching the consumer market every day, it is hard to keep up to new trends or new technology. There are also so many terms for eco-vehicles that make buying or even just researching a new vehicle challenging. We aim to help guide you through the confusing terminology around eco-vehicles and give you some insight as to why we chose to purchase a plug-in hybrid electric vehicle for our sales team instead of a traditional gasoline engine vehicle. So what is the difference between a hybrid, a plug-in hybrid electric or a fully electric vehicle?

This type of vehicle is great for those who need to commute far and want to be more environmentally friendly (and save gas money), but do not want the inconvenience of having to plug in. This is a great steppingstone to committing to more electric vehicles/plug in versions since it provides all the environmental benefits with little to no additional effort then their gasoline engine counterparts.

An Electric vehicle (often referred to as an EV) is (you guessed it!) an automobile that runs solely off of electricity and its electric engine/battery. These vehicles have a very large battery, that can generally go hundreds of kilometers off a single charge but require charging time. They require no gasoline, and solely require you to plug in the vehicle.

The use of this car is great for those that do a lot of intown driving and do not do a lot of long-distance car trips. Although these vehicles can go up to 500-600km on a single charge, that is in perfect conditions. The cold throughout the winter does hinder chargeability and therefore the amount of kilometers available to travel. Something that needs to be considered when purchasing this car is the driving distance requirements and the possibility of stopping to charge during long trips.

Examples of this vehicle are the Hyundai Kona Electric, all Tesla models, and the Chevrolet Bolt.

Plug-in Hybrid Electric Vehicles (often referred to as PHEV) are similar to regular hybrids, as they are powered by a gasoline engine as its main fuel source. However, these cars have a much larger battery that requires an external charging source, meaning it needs to be plugged in in order for the battery to charge. This vehicle behaves much like an all electric vehicle when charged, depending on the kilometer radius/speed required for the trip at hand, but has the gasoline engine to rely on if your battery dies. These vehicles tend to not have a long-distance radius on them for the electric engine but the radius is generally good for intown driving.

This type of vehicle works well for those who need a car that does it all. For in town driving, this type of vehicle excels as you can do all of your errands without using any gas. However, if you have the odd commute or out of town trip, no need to worry about having to plug it in halfway to your destination because your gasoline engine will get you to where you have to go.

Examples of these vehicles would be the Toyota Prius Prime, Chevrolet Volt (discontinued at this time), Hyundai Sonata PHEV and even some higher end car manufacturers have released PHEV models, such as the BMW 330 iPerformance, Porsche Cayenne E-Hybrid and Cadillac CT6 PHEV.

Given all the choices, your lifestyle and needs will naturally pull you towards one version over another. They all offer environmental benefits in comparison to their gasoline only counterparts, some obviously providing a fuel free solution which ultimately is the best. However, if it doesn’t fit your needs, it is useless. This is where the decision making came in for the company when choosing a car for the sales team.

The decision to buy a hybrid/electric car was easy, as we wanted to be as environmentally friendly as possible, given our line of work/industry (if they were more available and cost effective, we would look at converting the whole fleet to electric – maybe one day!). The decision then came down to function and need. Since the vehicle comes and goes from our workplace each day, it has the opportunity to plug in. Given this, the initial thought was that an all electric vehicle would be ideal. However, we have customers all the way from Niagara to Owen Sound to Windsor – how would we cover all this with only a 500km range (with no other opportunity to plug in during the day)? It was not possible. That is what led us to the Plug-in Hybrid model – we were able to get the best of both worlds. While traveling locally, the electric battery meets our needs with its limited (40km) range but when trips require a longer kilometer range, we are able to get great fuel-mileage and not have to rely on plugging in mid-trip. Given this, we decided on the Toyota Prius Prime as our company sales car!

So, will your next car be a hybrid or perhaps an electric vehicle? More automobile manufacturers are offering hybrid, electric and hybrid plug in options for many of their standard vehicles. Some manufacturers are even going full electric in the near future (such as Volkswagen). Given this, this does seem that hybrid and electric vehicles are where the automobile industry is headed. It will be interesting to see where the future goes in the automobile industry, as new zero-emissions vehicle solutions come around, such as hydrogen fuel cell technology and companies work on better, more efficient technologies.

In the near future I would not be surprised if we see gasoline engine cars being phased out through government intervention (such as the executive order in California, that states that all new cars and passenger vehicles sold in the state must be zero-emissions vehicles by 2035). The Ontario and Canadian government already provides monetary incentives to buying eco-vehicles and provide other benefits, such as the green license plate high occupancy vehicle (HOV) incentive (in which electric or plug in electric hybrids are able to use the HOV lanes without having a high passenger occupancy). Time will tell what the next big zero-emission vehicle take over will be, but hybrid/electric/hybrid plug-in vehicles are certainly trending in the Canadian automobile industry.